Last year I took my Dad to the Cinnamon Club for a Father’s Day feast, so when I read about Vivek Singh’s latest opening, I was keen to give Papa Shep another guaranteed tasty round of one of his favourite cuisines.

Found in Covent Garden, the youngest Cinnamon sister is the most vibrant yet, inspired by Indian marketplaces that are as rich in colour as they are in flavour. Mixing the casual vibe of urban London with heritage tastes and the energy of trade, Cinnamon Bazaar is an innovative all-day dining experience, an escape from the bustle of a tourist hot spot. 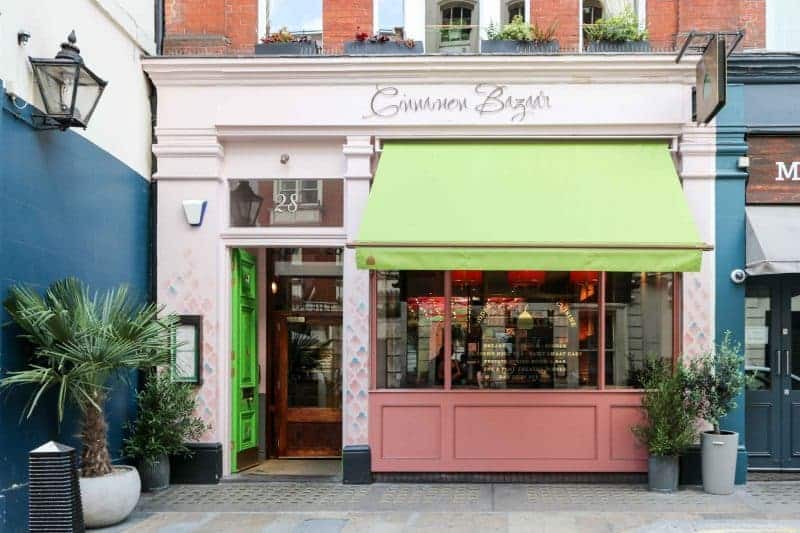 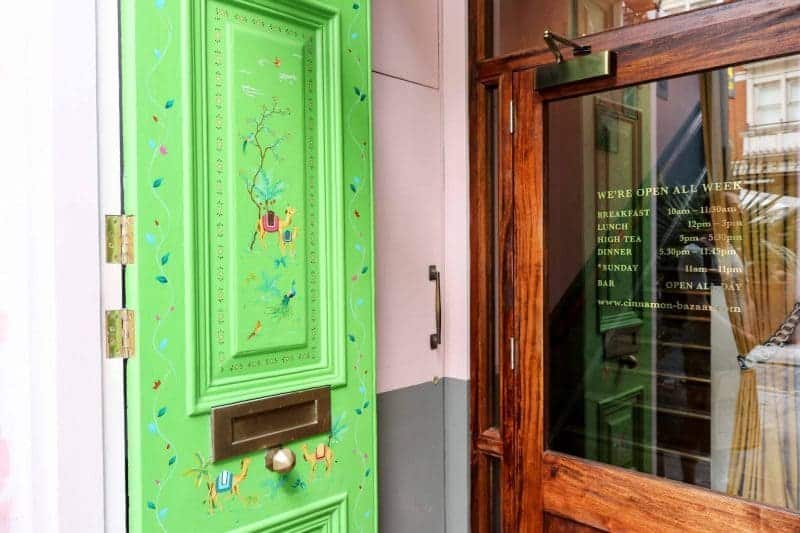 Continuing to embrace cross cultural dining, their latest menu serves spiced Indian dishes presented as a classic British treat. The Trader’s High Tea is a relaxed afternoon banquet with a huge selection of flavours, some modern and some more traditional.

We arrived into a perfectly relaxed atmosphere, a few parties celebrating Father’s Day, passing around teeny tiny humans between mouthfuls of samosas. I was immediately mesmerised by the décor.

A stunning ceiling of bright fabrics and plants lit up the room with a glass ceiling, whilst pastel glittering wallpaper had me lusting for a roll. As the Sunday afternoon became evening, groups of all sizes came and went, keeping the room at a peaceful level. 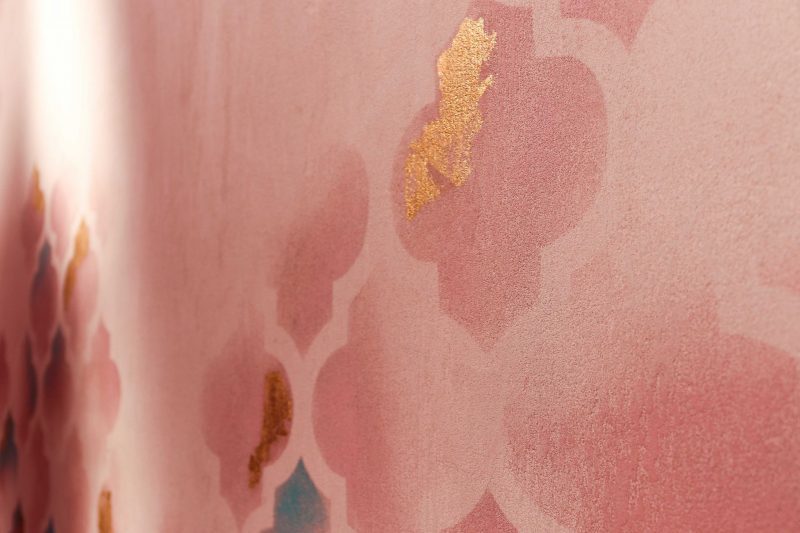 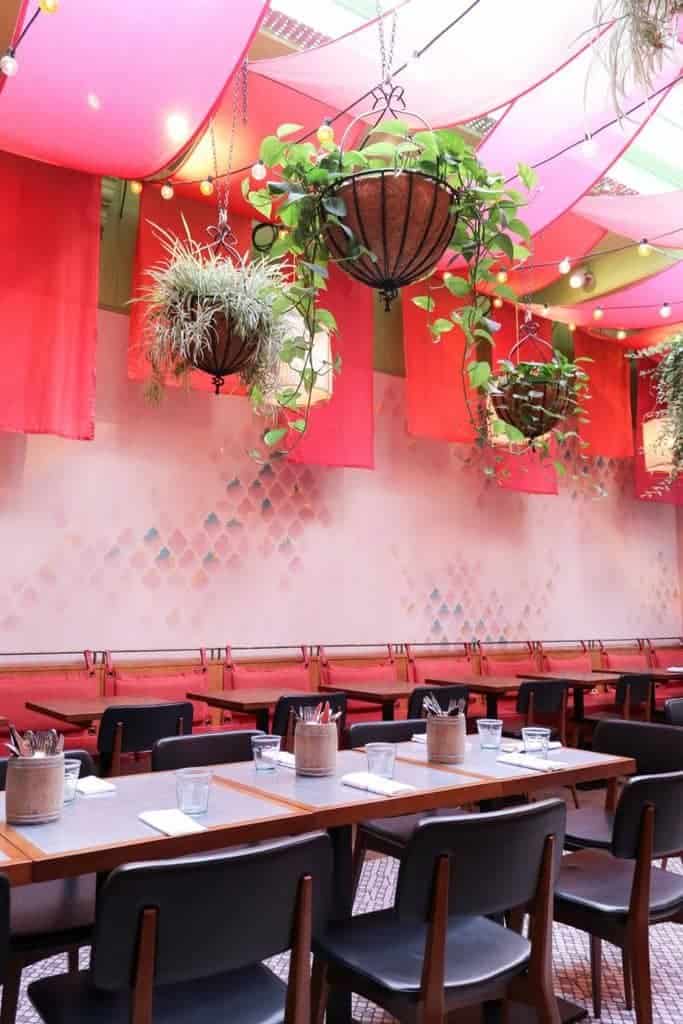 To begin with a signature cinnamon bellini cooled us down from our rush through the city heatwave. Now I love anything cinnamon scented so to find it in a cocktail is a treat I can’t fault.

Promptly served was a stand of three dishes alongside our first taste of chaat. Atop sat my plate of meaty bites; a tandoori chicken and chutney sandwich, and a Bhangra lamb slider. The sandwich was nicely creamy - albeit some slightly dry bread – but the mini lamb burger stole the show with a soft texture and fragrant taste.

Dad’s vegetarian alternatives were not second best. A paneer naan pizza was a fun combination of cuisines but again his Bengali beetroot burger was a real winner. Zingy and spicy, it was a surprising relief from the commonly substituted bean burger, especially when dipped in the fresh coriander and green chilli spread.

Next up was a warm bowl of allo tikka chaat and a samosa. The first, a spiced potato cake with curried white peas and chickpea sev, made for a delicious comforting stew. The Punjabi vegetable samosa alongside curried white peas was perfectly crisp with a divine savoury filling and sweet tangy tamarind chutney.

Before we reached dessert, we opted to sample some more of Cinnamon Bazaar’s chaat menu, a variety of street food style dishes perfect for sharing.

We picked two cold dishes to start, one which I couldn’t resist ordering due to its refreshing fruity description; pressed watermelon, amaranth seeds, date chutney and masala cashew nut. It was surprisingly spiced, cooled by the juicy watermelon and chutney. 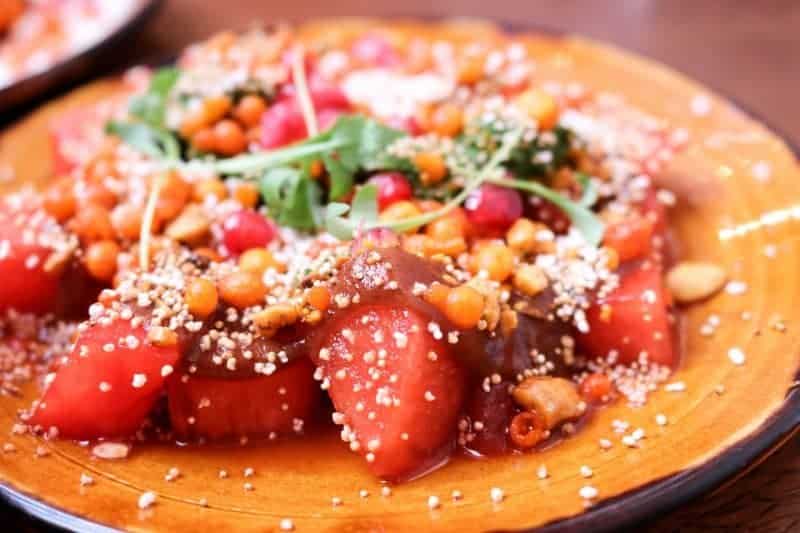 Our second dish was a beautiful Dahl bhalla chaat made of chilled lentil dumplings with spiced yoghurt and toasted cumin. The creamy dip was perfect for cooling spicier dishes. 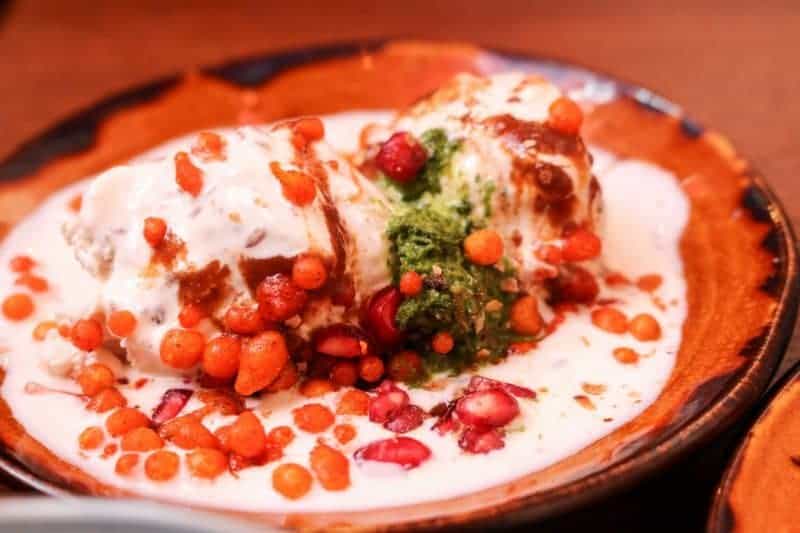 Our last chaat was a hot plate; Jodhpuri kachori chaat. A large round spiced onion dumpling was surrounded by curried white peas and a chutney medley. It was one of my favourites for the strong onion taste and crumbly texture.

Before tucking into dessert, with the little room we had left, we each ordered a pot of tea; fresh peppermint for myself and the Assam for Dad. Both were served in beautifully decorated pots with more lovely china. 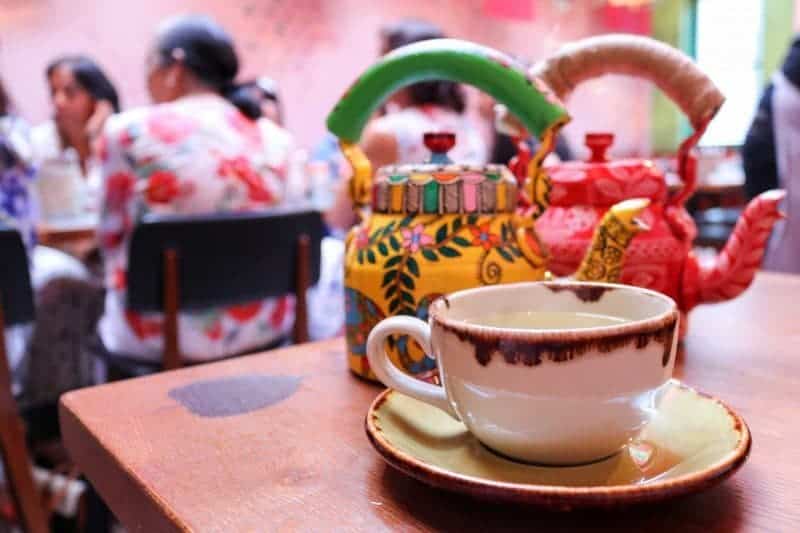 The last plate on our stand was a selection of carrot halwa rolls next to dark chocolate and walnut cake. Both weren’t particularly up my street… the rolls were just not really my taste although were enjoyed by Dad, and the cake just a little less moist than preferred yet sweetly enjoyable.

A couple of hours after arriving, we sat with our hot tea, nursing full bellies of spiced flavours and rich aromas. Another Father’s Day spent eating a moreish spread of Indian dishes, perhaps next year Cinnamon Kitchen? 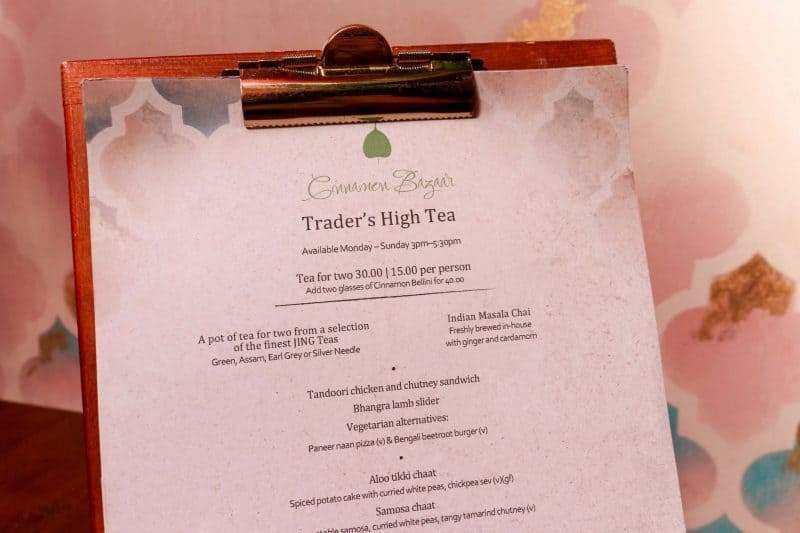 The Trader’s High Tea is a fantastic choice for anyone who doesn’t want to simply try one dish. For just £30 you can enjoy tea for two and sample a variety of flavours. And for an extra £5 a bellini will welcome you to the table. The tea is available Monday – Sunday between 3-5.30pm whilst Cinnamon Bazaar opens its doors from breakfast until late dinner.

Our Trader’s High Tea was complimentary but as always all views are my own.

WHAT TO READ NEXT